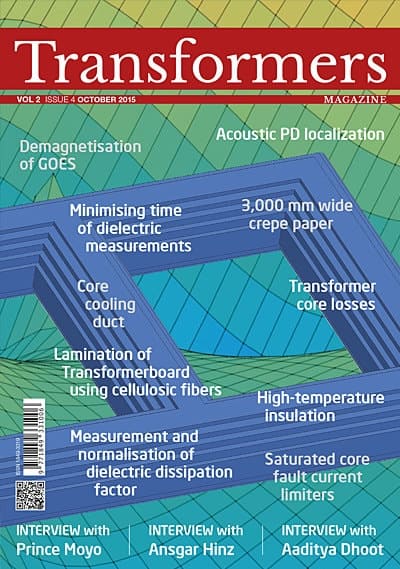 In July this year, a new higher efficiency standard took effect in the European Union and a second more stringent standard will take effect in 2021. In April 2013, the United States Department of Energy (US DOE) published a new standard due to take effect on the 1 January 2016. They determined that “more-stringent efficiency standards would be technologically feasible and economically justified”, but these regulations can create potential issues.

As an example, an effect of higher efficiency requirements is that transformers will increase in size and weight. According to the US DOE statement, in some cases poles will need to be increased in size due to the heavier transformer and the size of some pads will need to be larger for pad mounted transformers.

High-temperature insulation can help to mitigate these issues and even bring additional benefits to transformer manufacturers and end users.

Conventional insulation materials for liquid filled transformers have been used since transformers were first deployed in the electrical grid. Kraft paper, which is wood based paper, electrically insulates areas between conductor layers in a coil and between the conductors to ground. Originally, the thermal class was 105 °C and a few decades ago the industry introduced thermally upgraded Kraft paper which withstands an additional 15 °C.

The entire coil is submerged in mineral oil, which is absorbed by the paper. The oil provides additional electrical insulation and conducts the heat from the coil to the tank. Windings have cooling channels to enable the flow of the oil between conductor layers in order to cool the interior conductors.