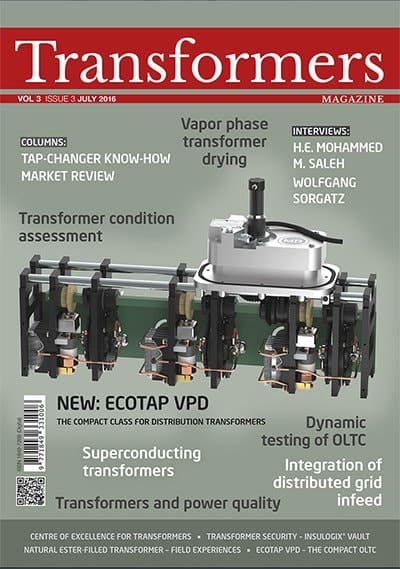 In the previous edition of Transformers Magazine, the typical properties of mineral insulating oils were illustrated. In this issue, the column will discuss alternative insulating liquids and their potential for being used with tap-changers.

Over the past 15 years, extensive research on various alternative liquids has been performed with the objective of qualifying selected tap-changer models to be used with these liquids. The liquids and eligible tap-changer models have been chosen according to their market share. Really laborious is the evaluation of the arc-quenching behavior, which includes the determination of arcing times at high and low oil temperatures, and the amount and composition of deterioration products, such as carbon (soot), acids and gases. Gases can be toxic, and acids can attack solid insulating materials. For this reason, research work has been focused on vacuum type on-load tap-changer (OLTC) models, so that the alternative liquid can be used both inside the transformer tank and tap-changer oil compartment. Non-vacuum type models (oil switching OLTCs) should only be used with alternative liquids in the transformer tank / tap selector compartment, while the diverter switch compartment is filled with mineral oil. De-energized tap-changers (DETCs) may also be used with alternative liquids.

Certain non-mineral liquids have been identified as suitable substitutes for mineral insulating oil, providing benefits for special applications. High-temperature or downtown substation transformers need liquids with low flammability (high flash point); transformers in environmentally sensitive areas should be filled with fully biodegradable liquids, and for applications like traction transformers the liquid should be chemically inert.

Eligible liquids show significant differences to mineral insulating oils concerning their composition, properties and performance; therefore, they don’t comply with the mineral oil standards discussed in Insulating liquids – Part I. If such liquids shall be used in tap-changers, each liquid has to be tested and evaluated properly.

One apparent difference, for example, is the higher viscosity of some alternative liquids (see Fig. 1). Viscosity affects the timing of the tap-changer switching operation at (very) low oil temperatures, and influences the oil flow which determines the cooling of transformer windings, terminals, contacts and transition resistors. Furthermore, liquid viscosity also influences the arc-quenching behavior. Even for vacuum type OLTCs, low-energy arcs or sparks are produced at the change-over selector which reverses the regulating winding or switches the coarse tap winding in and out. Capacitive currents of up to 500 mA have to be broken, and recovery voltages up to 40 kV on the opening contacts must be controlled. For liquids showing a higher viscosity than mineral oil, the switching capacity of the change-over selector is reduced, because arcing-times are longer than in mineral oil. This is probably due to the effect that cold liquid is not delivered fast enough into the hot arcing path to cool and quench the switching arc within the admissible time frame.

Figure 1. Viscosity of different insulating liquids on a ln(ln(n)) scale, and temperature limits