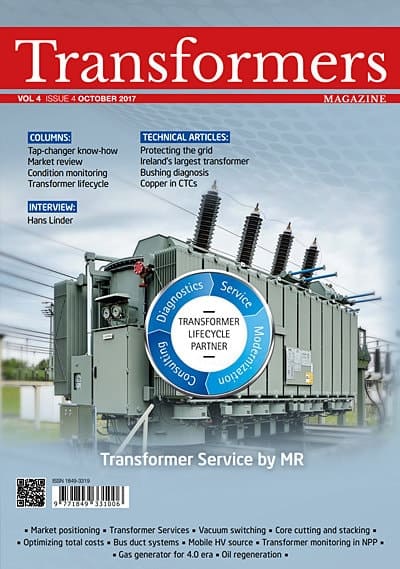 I have been working in the power product industry for the last 21 years. I started with high-voltage breakers in 1996, where I spent twelve years, and the last nine years I have been working with transformers in different positions, first as a manager for tap-changers and then for components, covering both tap-changers and bushings. These positions included a lot of worldwide travel and provided an opportunity to gain broad knowledge about power products industry, especially transformers and their components.

Based on my background and the knowledge I acquired during these 21 years, I have realized that the competition on the market is getting harder and harder since the deregulation has taken place in most of the countries in the world. Earlier, there were fewer players that dominated local or regional markets, while today, there are many more electrical equipment manufacturers, and also the globalization has opened up all the markets. What we can see, in the last few years at least, is that a lot of good companies have appeared on the market, but their problem is that they don’t have the organizational structure to meet their customers. So, it will take a lot of effort for them to find customers globally.

On the other side, there is a global trend of more and more EPCs popping up, making the environment even more competitive. In all this, companies have to send their people to visit customers, they need to visit and exhibit at fairs, and have a broad sales network in order to meet potential customers. In many cases, if you are to succeed, you have to open up offices and be present locally, which costs a lot of time and money, and is not easy to set up.

That is a broad picture. If we look at the transformer market, it is even more exposed to competition, according to what I have experienced. Having worked with all transformer manufacturers in the world, from 50 kV and up to 1200 kV, I think I have a pretty good picture of the entire market. I would say the market has become extremely competitive in the last ten years. If we just look at the production capacities in the world, we will see a huge over-capacity, with a lot more producers than needed, which causes quite hard competition race all over. Earlier, if you look at some areas in the world, you had your regional area where you always supplied your transformers, and everything was good; you had specification locked in to the customers and so on. Suddenly, a lot of new players came from India, China, Eastern Europe, Turkey, to name some, to the areas that earlier you didn’t expect them to show up. That has created a lot of tension and competition.

To get a better understanding of how this concept works, check out our video.