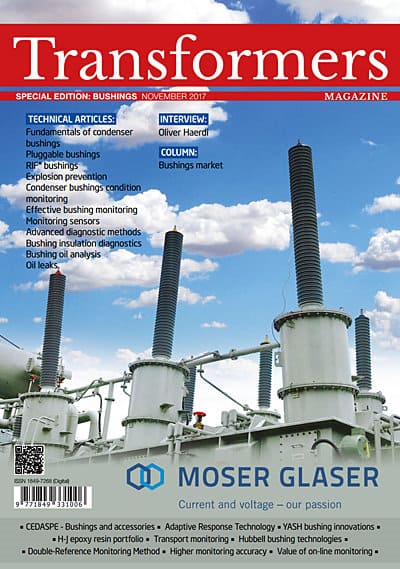 Transformer bushings are one of the most critical components of a transformer. Up to 20% of major failures on high voltage transformers today can be tracked back to bushings. Almost half of these failures result in catastrophic failures like explosions, fires or oil spillages. The cost of these damages and the lost opportunity to deliver energy could be several hundred times higher than the price of a bushing. Even a failing bushing which will not lead to a catastrophic failure can harm people due to burst porcelain insulators and broken fragments that can be catapulted through the air by the force of the breakdown arc.

Today, the experience is that a transformer will have two sets of bushings during its entire lifetime. Transformers are expected to last 50 years, while bushings have an expected lifetime of 25 years. Experience suggests there are two points of failure within the lifetime of the bushings. One: when the bushings reach an age of 10 to 13 years, failure is possible due to production and quality related issues. The second wave of bushing failures can happen between 20 to 30 years of age, which is considered as the normal life time. It is also true that bushings can fail younger than 10 years as is also true that there are bushings installed on transformers with an age of more than 50 years.

Bushing monitoring is designed to detect incipient faults and give an early warning, as well as using the bushings until their real end of life. In order to have a reliable monitoring system, the accuracy of the acquisition of the monitored parameters needs to be very high. For example, even if a relevant amount of moisture is impregnated into the bushing core, the loss angle will only show a slight change at ambient temperature. Common bushing monitoring systems today are not able to capture these slight, but important changes. The bushings from different phases are being cross-referenced to each other. The sister bushings are used as a reference source to assess the relative condition of a bushing. Voltage and angle differences between phases, as well as different temperatures and aging rates are not considered with these methods.

Newer approaches are using stable voltage sources as reference signals, preferable from the same phase as the monitored bushing. The phase shift between the leakage current signal from the bushing and the voltage from the voltage transformer will be measured, corrected by the phase shift offset, and the loss factor can be calculated directly. For example, by using a voltage transformer (VT) as reference source, small, but relevant changes can be detected.