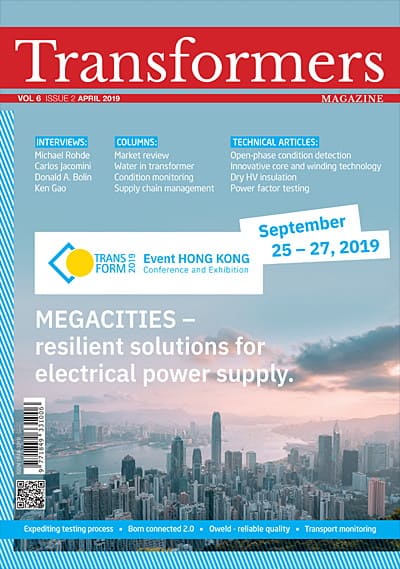 TRANSFORM was established in 1998 by MR as a platform for premium European manufacturers and suppliers to the transformer industry. The idea was that by providing first class, premium components for transformers, you end up with high quality, very reliable transformers. TRANSFORM was intended as a platform where premium suppliers to the transformer industry can talk to their customers – transformer OEMs, grid operators and industrial companies – all at the same time. We organize key events every three years and invite transformer OEMs and transformer operators to join our events so that we as suppliers can have a discussion with them. These events are not just about exhibition or marketing; rather they are always linked to a technology study, the results of which are shown in a future lab. We held these future labs in 2015 in Vienna and 2013 in Abu Dhabi. We are also going to have another future lab in Hong Kong this year, where we will be talking about the smart transformer of the future. The event is always a combination of scientific lectures for some deep dives into individual topics, a future lab and a fair. Usually, at these main events, we have 400 to 500 participants from the industry: suppliers, transformer manufacturers, grid operators and industries, EPCs as well as some domain experts such as oil specialists and experts from testing institutes.

From ideas to real solutions

Ideas and visions that have been presented in our future labs often become reality. I can give you some examples from the Vienna future lab in 2015 which have been turned into reality. One example is the intelligent transformer management system that was introduced by MR in Vienna as a vision and that has now been realised in ETOS® (Embedded Transformer Operating System) which MR launched at the Cigre exhibition in 2018. Another example: Pfisterer has presented an idea for plug-in devices to make connections for transformers flexible and this also has been realized. The new solution for Consolidated Edison of New York is a so-called resiliency transformer realised jointly with a few other companies. There are many such examples. This demonstrates that showcases of future labs are not just ideas; they are close to reality and close to the customer’s needs. The transition time from an idea to reality is up to three years, maximum five years. Therefore, our events’ participants have the opportunity to see future solutions a few years before they will be available on the market. Thus, they can better prepare for solving their pain points.