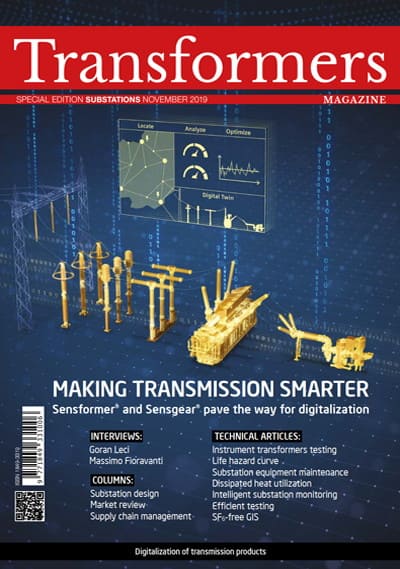 Global distribution transformers market reached around $5.5 billion in 2018 (up to 600 kVA and below 40 kV). The majority of this demand, around 74 %, came from distribution utilities globally, followed by 19 % from industry and around 7 % from power generation. As a general trend, market in emerging countries is mostly driven by new additions along with replacements, while in developed markets, including western Europe and North America, most of the demand is due to end-of-life replacements. Distributed generation and electric vehicle supply infrastructure are also influencing demand in certain countries around the world.

Some of the leading players in the distribution transformers market today are ABB, Schneider Electric, SGB-SMIT, Siemens, Crompton Greaves, Ormazabal, WEG, Jinpan and Voltamp transformers. ABB, Schneider Electric, SGB-SMIT, Ormazabal and Siemens (esp. for dry-type) have a big share of global transformers market and are well positioned in multiple countries around the globe to maintain their market position.

Market characteristics and business practices for the distribution transformer market can vary across regions and countries. Success in one part of the world does not necessarily lead to success in other parts of the world as the regulatory structure, market structure, and business practices can vary significantly. According to a recent study conducted by Power Technology Research, the distribution substation market continues to grow.

In most cases, the market setting in these regions follows the standard model, where a central electricity authorities or regulatory body, working directly under the ministry of power or energy, is responsible for the regulation of the generation, transmission, and distribution sectors. These regulatory bodies are also responsible for setting tariffs and policies, but they are not involved in equipment planning and procurement.

A few major players contribute to 60 – 70 % of the generation and in most countries of the region, the transmission is controlled by one utility. In most cases, the transmission utility is also involved in the distribution. In Africa, rural electrification agencies are common.

Transformer sales typically are made through engineering, procurement, construction companies (EPCs), and this is especially true in countries such as Saudi Arabia and South Africa where turnkey business is prominent. In both these countries, local content (in the form of local manufacturing, local workforce, or local ownership) gives an advantage in the bidding process for tenders.