Column: The importance of thermal design to transformer lifetime 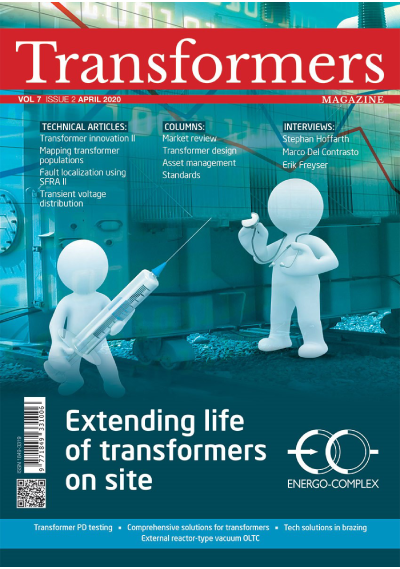 Although anecdotes and individual case studies can be misleading on their own, sometimes they can spark a train of thought or a line of research that does help our understanding. This is true in the case of the relationship between transformer thermal design and transformer lifetime. Specifically, during my time at National Grid, I had to conduct failure investigations on two particular units that stayed in my mind. The first was very old, approaching 50 years in service and was indeed one of the first 275 kV units ever built. It had a very simple ONAN / OFAF (see IEC 60076-2) cooling arrangement with no directed oil flow inside the tank. Although the oil was pumped through the coolers (if the thermostatic control called for it), once inside the tank, it was allowed to find its own way to and through the windings. The thermostat, an early Winding temperature indicator (WTI), relied on current from a current transformer heating an oil pocket at the top of the tank, to give a crude indication of winding temperature. This transformer was unfortunately damaged when an oil valve was left closed after maintenance, resulting in thermal expansion rupturing an internal barrier. Subsequently, pressure relief valves were fitted to similar designs to prevent this. Now, the transformer had admittedly had quite an easy life from the loading point of view, but it was still quite a surprise to find the paper in a very good condition, much less than halfway through its lifetime, according to DP (degree of polymerisation) measurements.

The second transformer was a much newer unit, in service for only around 15 years before it suffered a winding failure. Again, the loading had not been very high, certainly less than 100 %, but this time the paper was at the end of its life, actually flaking off the conductors when it was scrapped. This experience got me asking why were these transformers behaving so differently? This was an important question for the asset management of other similar transformers on the system, so research projects were started to understand both the range of different lifetimes and the possible causes of the variability. As always, the research throws up new avenues to explore and is still ongoing, but some of the key results shed light on potential thermal design and manufacturing issues that can drastically shorten the life of a transformer.