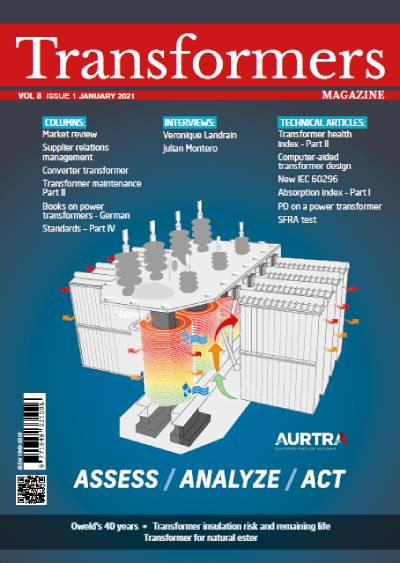 A simple diagnostic test to identify winding with shorted turns

The objective of a traditional voltage ratio test is to verify the proper number of turns, internal connections and to serve as a benchmark to assess possible future damage, e.g., shorted turn(s). While theoretically, a change in the voltage ratio data should point to the winding with a shorted turn(s), in practice, it may not paint a clear picture. To address that, an inductive inter-winding SFRA (Sweep Frequency Response Analysis) setup was employed. It offers a frequency scanning from low frequency (e.g., < 200 Hz), where the ratio of the induced voltages is closely proportional to the turns ratio. Therefore, the direction of the deviation in the aforementioned SFRA trace segment points to a winding hosting the defect. The following discussion describes the basics of the test, along with the results of several field investigations.

Fig. 1 shows a basic setup of a SFRA ratio test, which employs connections for the inductive inter-winding SFRA test. In that, the high-voltage winding is excited by the test voltage applied between the red lead and ground, and the secondary voltage is measured between the black lead and ground. Let us recall the expression for the SFRA magnitude in dB:

Obviously, the relevant ratio data can be obtained in a frequency range where the ratio of voltages corresponds to the ratio of turns. To that end, for the units tested, the SFRA ratio remained constant at frequencies < 200 Hz. The difference between the SFRA traces can be useful in detecting / confirming the presence of the defect (3):

In (3),  are SFRA ratio values obtained from the traces of each phase. To identify which winding has a shorted turn, the trace deviation in that segment is examined. If the turn is shorted in the low-voltage winding, the trace segment will move upwards (towards a higher ratio value) and move downwards (towards a lower value) if the shorted turn is located in the high-voltage winding. A comparison can be made either with the previous data or with other phases. Furthermore, the nameplate (NP) voltage ratio can be compared with the SFRA ratio taken near the power frequency to avoid potential interference. The latter allows verifying that the SFRA ratio test setup is correct.